Catherine of Aragon (born in Alcala de Henares, Spain, 1485 - died at KimboltonCastle, England, 1536) Infanta of Aragon and Castile, daughter of Ferdinand and Isabella, was queen consort of England as the only wife of Henry VIII, as the affirmation of contemporary Catholics, and as the first in a list of six wives for the faithful to the royal cause. King Henry VIII annulled the marriage of 24 years duration, of their claims with acourt lady of Queen Catherine, Anne Boleyn, and the inability of the Queen to beget a son.


Born in the Archbishop's Palace Alcala de Henares, in 1485, was the youngest daughter of King Ferdinand II and Queen Isabella. It was great granddaughter of King Edward III of England and Queen Elizabeth of York. The daughter of the Catholic kingswas the one most like her mother: blonde, blue eyes, determined and intelligent.Catherine had great intellectual and moral capacities. Received a thorough Catholic education worthy of a future queen, learning Romance languages ​​of the Iberian Peninsula, French, Flemish, English and Latin. It also instructed in the arts such as dance and music. At 6 years watched the exciting decision of the Nazari Kingdom of Granada and there she went to live with her ​​parents, because Isabella and Ferdinand always considered the capital of Spain, the Catholic Monarchs, could only be Granada.


Following the policy of the Catholic Monarchs to isolate France, Catherine was betrothed in 1489 to Prince Arthur of Wales, eldest son of King Henry VII of England. ACatalina caused him great pain and suffering leave the Alhambra, as she had spent inthe Red Castle much of his childhood and adolescence. At age 15, in August 1501, the Princess des boat left the harbor of Corunna for England. Catherine arrived at the portof Plymouth where he was received by the Archbishop of Bath, on behalf of PrinceArthur. On 14 November, was espoused by the unknown, and sickly young Prince of Wales at St Paul's Cathedral in London. She made ​​a great impression on his future father. As Prince of Wales, Arthur, was sent to Ludlow Castle in Shropshire to chair the council of Wales and was now accompanied by the Princess of Wales. A few months later, the young prince died of an epidemic known as the English Sweat, leaving awidow and a virgin princess.  The interests of both crowns took to negotiate the marriage of the widow next in line of succession, Prince Henry, brother of the late Prince Arthur, who had only 11 years.


In 1509 King Henry VII died in England. His son, Henry, took over the reign as Henry VIIIof England, the new Tudor dynasty, showing his desire to have as soon as possible to the Spanish princess. That same year, and 2 months later for the coronation of Henry, in the chapel Grey Friars, Catherine was married again. She was crowned queen on June 24, 1509. Both as Princess of Wales as being queen, Catherine was extremely popular with her ​​subjects. She came to rule the nation as Regent while Henry invaded France in 1513. She also rode himself at the head of the reserve troops who defeated and killedthe king of Scotland in 1513. By then, Catherine had given birth to a girl dead and dyinghad been the heir to the throne.


It was a happy marriage for both, with infidelities by the king for 18 years until King Henry began to be seriously concerned about the need for a male heir and the end ofthe fertility of the queen.

Children born between Catherine of Aragon and Henry VIII of England:

The birth of a male became essential to the sovereign.

In 1520, Catherine's nephew, Charles IV, Emperor of Holy Roman Emperor and king of Spain, visited England, and Queen quickly began a policy of getting both an alliance with him as with France. Immediately after the departure of the emperor, the queen accompanied the king to France, to make a visit to Francis I of France, reminding the meeting by the splendor of the occasion. However, two years after war was declared against France and again the Emperor was received in England to make plans for the marriage of Princess Mary.

The king, in love with Anne Boleyn, requested the annulment of marriage to the Catholic Church in 1527, under the pretext that their marriage was illegitimate because Catherine had been the wife of his brother. The initially favorable attitude of Pope Clement VII was amended following the refusal ofCatherine and the pressures of the Emperor Charles V.
Held emerging Protestant, the issue sparked a major controversy over papal primacy,which was attended by theologians and men of letters. Finally, Henry was married onJanuary 25, 1533 Anne Boleyn, already pregnant with the future Queen Elizabeth I. The Archbishop of Canterbury, Thomas Cranmer, annulled the marriage of the king withCatherine. Henry VIII broke away from obedience to the Roman Catholic Church in 1534and became recognized as supreme head of the new Church of England.Catherine was confined successively in Ampthill, Buckden and Kimbolton Castle, where he died on January 7, 1536, at age 50, victim of cancer.Although he never renounced the royal title, was buried in Peterborough Cathedral with a funeral of Princess Dowager own instead of a queen. 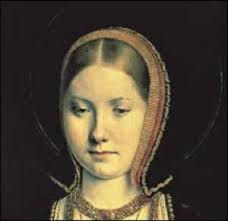