It is remuneration received by the employee, in addition to the usual twelve monthly installments.

The Romans called "strenae" exchanged gifts with friends to honor the gods, and as a sign of happy omen. A Roman tradition attributed the origin of the bonus king Titus Tatius, who was born in the habit of going (on January 1) to pick verbena, Strenua the sacred forest, the Force, or Strenia, the goddess of health, with in order to obtain divine protection during the new year. Another tradition supposed that the people went in procession to the palace to offer, while wishing him a good year, branches of the shrub verbena, considered as a bearer of happiness. The primitive simplicity disappeared, and bonuses came to be more or less luxurious objects, leading to degenerate into abuse.

The bonuses were very varied in nature. Arable bonuses correspond to the Golden Age; Then came the time when these were foods of all kinds; Later consisted of pieces of gold, silver and bronze; then furniture and clothing.

The bonuses were one of the rich expensive practice, ripped the poor, for the servants offered bonuses to their masters, citizens offered it to the princes, and the disciples to their teachers. The force of habit forced some to offer what they did not have. Against this obligation to give, wrote the Fathers of the Church, to prevent many Christians to forget what they were. Through these authors know about the custom of many people, especially the peasants, to put on the doors of their houses (during the night prior to January 1) tables laden with all kinds of food consumed for passersby.

In the Middle Ages, kings, princes and nobles continued to observe this practice.

The bonus as childish habit.

The bonus, in Spain, is also the gift of sweets that are distributed mainly in children's parties and Christmas day.

It is customary among children, touring the neighborhood, house to house, singing carols accompanied by tambourines, friction drums and empty bottles of anis (like a musical instrument). In this case, instead of asking for money, children always ask for candies and sweets.

The pig slaughter is a regular number one method of slaughter, or pigs, in order to take advantage of his flesh, and elaborate inlays. These sausages are consumed for a year for a family.

This practice is rooted in many European countries. Once a year it takes place during the coldest winter months (usually December). It usually has a festive and celebratory hand, has an economic side.

Arriving in March (spring in the Iberian Peninsula) and the negotiation begins in livestock markets for the purchase of one or more pigs (gilts) for slaughter, to be sacrificed in the month of December. Thus, fattening always started 9 or 10 months before slaughter. The fattening pig was carefully planned, so that was fed to pigs with specific foods: cabbage, pumpkins, potatoes, beets, corncobs, thistles, nettles, wheat flour, rye flour, cereal, apples, pears, quinces, etc. In rural areas, it was common for landlords calculate the number of pigs they need to feed their serfs during the harvest period, depending on the amount of land cultivated, since the pork was the main ingredient of the broth they were given as maintenance.

In Extremadura, and other regions where the meadows, with oak trees, fattening abound is the last phase of pig breeding. This occurs when pigs are left free in the pasture, coinciding with the ripening and falling acorn, in the months of October, November and December. The fattening on acorns, grass and herbs of the meadow and the physical strain of animal, under liberalization, get their meat has a unique taste.

Ranching in the northern regions of Spain was characterized by:

- A strict immobilization of the animal (This is no longer made) in tiny pigsties, of which it is made ​​out to the pig once a day to take a walk around the farm, when the farmers took the opportunity to clean the pigsty .

- A select different vegetables and diet food, for taking the pig out the appropriate weight of about 15 pounds (200 kg).

The days before slaughter.

The days before slaughter family meetings were held, usually inviting one or two neighbors and knives were prepared. Then the elders of the family chose a day to do the slaughter, a day that was anticipated without rain, fog, snow or humidity (ideal was a sunny day with a good morning frost).

The day of the massacre have breakfast an hour or two before dawn. A hearty breakfast is usually taken as the day is often hard work. There are people who often accompany breakfast with a glass of brandy.

The session begins has barely left the Sun: between 9 and 10am. The butcher is provided with a hook which engages the jaw pig (the pig is already dead) and takes him to a wooden bench. Next to butcher several women and children with buckets and buckets are positioned to collect the blood and remove pork, preventing curdling. The pig's blood was later used for the production of sausages and pancakes.

Once the animal is bled, proceed to charred, burning the skin of the pig. To do this, it puts the pork on a bed of combustible material (broom, broom, bracken or straw) to remove hair from the skin. Then, with the help of a knife, pig skin is scraped to remove the burnt hair.

Then the pig is opened, and all the viscera are removed carefully keeping them. Part of the viscera, especially the intestines and stomach, are reserved and cleaned of its contents. This operation is performed generally by the women of the family who, all together, they head to the nearest stream and cleaned of all dirt. It is not a pleasant operation since odor, extreme cold and moisture are present during the process.

After this, a sample (from different parts of meat) to the vet in the region is given (usually usually first thing in the morning, the third day of slaughter) and he gives his verdict at noon, if the verdict is positive children, tail pig roast and eat.

In the afternoon we continue with cleaning the viscera and begins to chop the bread, cook the rice and onions to make the sausages. That day, in the evening, a dinner is held on the first pig meat is eaten.

The minced meat is done the day after. In the morning cutting out the parts of the pig is cut up and shared among different "specialists": people who salted hams and pork shoulders; people mince meat, seasoned and added garlic to make chorizo; persons marinating pork loin; people who put salted bacon, etc.

That day, a fire is lit and the first pieces of meat are roasted, seasoned with garlic and paprika, and accompanied by a good young wine. 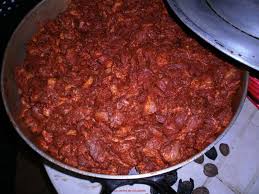 After eating, the removal of fat from the pork is done. Grease gets into a pot and melt in fire. The liquid fat is left to cool in earthen jars. Part of this fat can be used in soap making.

To embed the sausage special machine is used. This machine, by pressing enter chopped (and seasoned) meat in the gut of the pig.

After smoking occurs. Smoking is a very important operation because it depends on the good condition of the sausage. In this operation the younger people work. Is to put the sausage on a large fire with fire and smoke. The smoked sausage concludes when is dry and suitable for consumption.

Song of the Sibyl.

The Song of the Sibyl is a liturgical drama Gregorian melody was widely publicized during the Middle Ages (in Southern Europe), which is traditionally interpreted in the mince (Midnight Mass) in Churches Island of Mallorca (Balearic Islands, Spain) and in the city of Alghero (Sardinia, Italy).

Indeed, Mallorca and Alghero are the only two places in this song is a tradition that extends from the late Middle Ages to today, having been immune to the ban occurred at the Council of Trent (1545-1563). Precisely because of this, on 16 November 2010, this tradition was declared by UNESCO as Intangible Heritage of Humanity.

Sybil is a doomsday prophetess of classical mythology, introduced and adapted to Christianity by analogy can be drawn between this prophecy and the biblical concept of Judgment.

The oldest evidence of this Christianized song, and sung in monasteries, is contributed by a Latin manuscript of the Monastery of Saint Martial de Limoges (France), in the Carolingian Empire. In Spain, the oldest document preserved a manuscript of the Visigoth period, belonging to the Mozarabic liturgy. From the eleventh century data also Ripoll manuscript written in Latin, in the field of Hispanic liturgy.

The Song of the Sibyl constituted, therefore, a Christian cultural tradition which had as its central theme the Day of Judgement (trial to be broadcast on Good and bad people). Initially it was not like today's Christmas Eve.

The day of judgment will come to anyone who has served.

Jesus Christ, Universal King, eternal God and true man, he will come from the sky. And each one just given.

Before Judgment, the Antichrist will come, and everyone will torment. He will be served, as God. Who does not want to believe, he will kill him.

His reign will be very short. At that time, his power, die martyrs, all on one site, and those two saints, Elijah and Enoch.

The Sun will lose clarity, showing dark and clouded. The moon will not give light and the world will be sad.

The King of the Universe will say to the wicked, very angrily:

- Go, you cursed, into the torment! Go with the eternal fire! Go to hell with your prince!

The King of the Universe will say to the good:

- My children, come! Blessed, inherit the kingdom which I have given you since the world was created!

Oh humble Virgin! You who have given birth to the baby Jesus tonight.Pray to your son to save us from hell!

The day of judgment will come to anyone who has served.